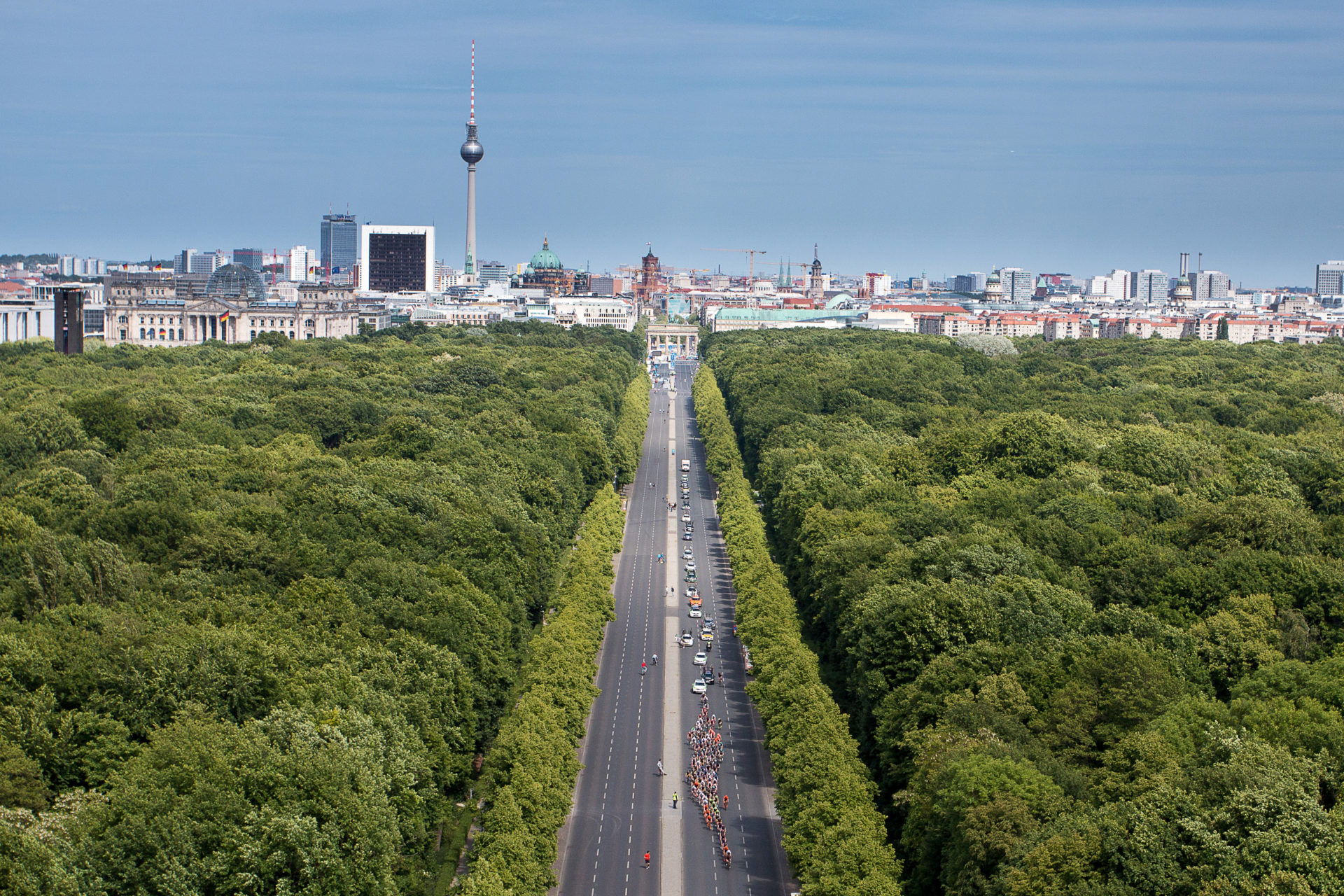 Also granfondos can be beautiful in a different ways – the Dolomite Marathon is unforgettable for the beauty of the Dolomites, the Nove Colli for the cheering crowd, the Maiorca 312 for the alliance among cyclists to complete the epic 300 km (as well as the beautiful view of the sea), the Parigi-Roubaix Challenge no need to say why.
According to all the cyclists who already did it, the plus of the Euroeyes Berlin Velothon is the organization turned the Gran Fondo in a big bike party, not only for the cyclists, but for the whole city.
In Berlin, they look to be fully conscious of what they have – no mountains, a lot of works of art, many wide boulevards, parks, lakes, a bike friendly population – and they have organized a bike event which enhances what the city offers. First of all, as it’s obvious, it’a a metropolitan Granfondo, but a real metropolitan one: we will not start from one suburb to go immediately outside the city, not to bother car drivers, but we will totally enjoy the most representative areas of the city.
The short course (60 km) is a tourist ride in Berlin and its parks on roads totally closed to traffic. The medium one (120 km) reaches the surrounding countryside in the south of Berlin and the long one ( 180 km) is the 120 km plus a second ride in the 60 km track.
No mention to the altitude gain, but – as Cima Coppi or Souvenir Henry Desgrange is  60 meters high on sea level (wow!) – it should be about zero. It is a very fast race, promoted as a speed festival, with a unique passage into the take-off runaway of Tempelhot airport – a beautiful  work of art of the 20s – to complete the speed festival. At the same time the organizers really care to point out that any kind of cyclist is welcome – no matter if on the latest aero bike or their grandma’s one. They even expect my old-aged mum can ride the 60 km on her old-style Graziella next to a safer cycling guide (I imagine him to be a guide to check energetic old age mums/dads don’t bump into cyclists). Kids are also welcome at the Kids’ Velothon (6 – 12 years old).
All of this means 13.000 riders and 300.000 spectators along the road to cheer cyclists and not to complain they cannot go at their favourite breakfast bar by car !! German people must be appreciated for that!
Thanks to this spirit, also my wife will ride the short course with the safer cycling guide (hoping he will not be a handsome blonde german with all his air in their place) and have fun.
For the first time, I won’t have to worry she gets bored while I’m cycling, but only her not to arrive at the beer garden before me. Cycling in a traffic-free city under the Brandeburg Gate, along the Berlin Wall or the airport runaway is great. But even greater is the bike festival everybody and the city itself is involved in.

There is just one  drawback, no pasta party,  but at the end of the competition all cyclists  – or at least all cyclists belonging to a sports association ( by the way, sign up for BKLK) – are welcome to the beer garden where they will enjoy a cool and refreshing  beer. What about the date? 18 June.
If you cannot come on 18th June, Berlin Velothon is organizing a club program with Sunday rides. Of course they won’t be as fascinating as the Berlin Velothon but it’s better than nothing.